Reputable Alaskan Klee Kai breeders do not advertise on sites such as Puppyfind, Craigslist or Kijiji. They often have wait-lists for their litters- meaning that their puppies are usually reserved even before they are born. Puppyfind, in particular, has been the source of many Alaskan Klee Kai scams as of late; many of the puppies advertised appear to be mixes being passed off as purebred puppies- this is just from their appearances. On the rare occasion that a puppy advertised appears to match the standards of the Alaskan Klee Kai in terms of looks, they are almost always being sold by a non-reputable breeder. Should you choose to purchase your puppy from them, it is almost certain that you will not be receiving any papers for your “purebred” puppy. Pay attention to the name of a breeder’s kennel as it may also offer information regarding their reputability. Generally, you want to avoid any that contains the word “farm,” as this implicates that they are running a business by raising and selling puppies- like puppy mills. The bottomline: AVOID purchasing an Alaskan Klee Kai puppy from the breeders advertising on such sites. 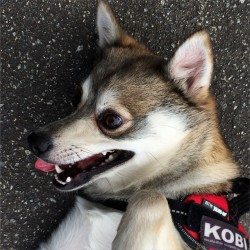 This refers to individuals trying to sell Alaskan Klee Kai puppies when in reality, there are no puppies and no dogs. These types of scams are most often seen in online buy/sell websites such as the ones mentioned above. In a way, these scams are the easiest to distinguish as being scams as they often will have an asking price that is way out of the range for a typical Alaskan Klee Kai puppy. For reference, Alaskan Klee Kai puppies range anywhere from about $1800-3000+ from a reputable breeder, these ads often ask for a fraction of this price (ex. $1000, $800). These fake puppy ads may also claim to require a “deposit” in order to hold your puppy. If you see a sale that seems to be too good to true, it probably is. Often times, photos of Alaskan Klee Kai puppies from authentic breeders/owners or stock photos will be used without permission in their ads. The descriptions in the ad will also tend to be short, generic and vague. Example 1: 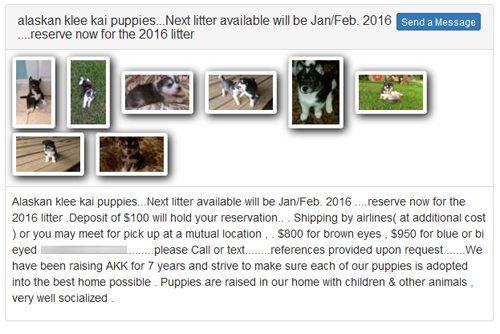 Importance of knowing which scammers/mix and backyard breeders to avoid 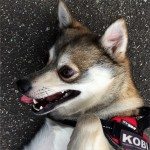 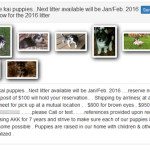