A breed standard has been developed for the Alaskan Klee Kai. These guidelines essentially describes attributes such as appearance and temperament of the breed. They are used and followed by reputable breeders in attempts to advance the breed to a state of similarity and are also used by judges as a tool for assessing dogs in the show ring. The following Alaskan Klee Kai breed information is from the United Kennel Club website. 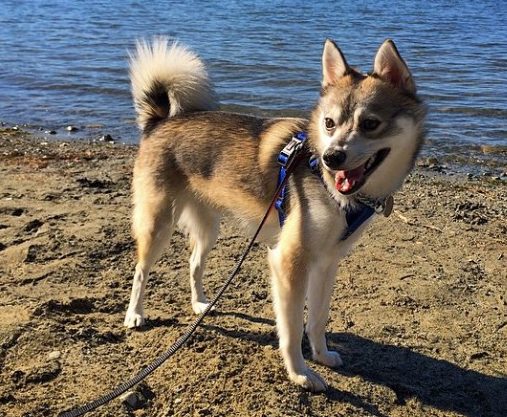 The Alaskan Klee Kai is a small version of a type of dog referred to as the Alaskan Husky, with a wedge-shaped head featuring a striking masked face, prick ears, and a double coat. The length of body is just slightly longer than the height. The tail is well-furred and curls over the back or to either side when the dog is alert or moving. The appearance of the Alaskan Klee Kai reflects the breed’s Northern heritage.

The ribs are well sprung out from the spine, forming a strong back, then curving down and inward to form a body that would be nearly heart-shaped if viewed in cross-section. The loin is strong and short but narrower than the rib cage and with a slight tuck-up.

The chest is moderately broad and let down to the elbows. When viewed from the side, the lowest point of the chest is immediately behind the foreleg. The forechest should extend in a shallow oval shape in front of the forelegs but the sternum should not be excessively pointed.

Faults: Chest too broad; barrel or flat ribs; slack or roached back. High in rear.

Serious Faults: Over-angulation; hocks turned in or out; thin or weak thighs.

All coat colors acceptable provided that the facial mask is distinct and clearly visible and there is a contrasting lighter color on the dog’s throat, chest, breeches, feet, legs and underside. The overall appearance is one of symmetry.

The most desirable mask consists of dark coloration on the skull which extends down the bridge of the muzzle and under the eyes, provided that the darker color under the eyes extends no more than halfway down the muzzle; light spots over the eyes; and a contrasting lighter color extending up the cheeks to a line between the outside corners of the eyes and the base of the ears, down the sides of the muzzle, under the jaw, and down the throat. The fur on the inside of the ears should also be of the same lighter contrasting color.

Any of the following markings are very desirable but it is not necessary that all be present: Light spots over the eyes; a light blaze centered in the middle of the skull and stop; a dark strip down the center of the muzzle which may or may not be evenly divided by a narrow light-colored strip; dark coloration under the eyes; and dark coloration at the tip of the tail. With the exception of the blaze and the light spots above the eyes, the more of the lighter contrasting color present on the upper part of the face, the less desirable is the mask, with the least acceptable being the Widow’s Peak (where the entire face is of the lighter color with just a small dark area capping the top of the head and a point dropping into the center of the upper forehead).

It is intended that the Alaskan Klee Kai remain a small to medium-sized dog. Height is measured from the withers to the ground. An Alaskan Klee Kai should not appear heavy or too thin. Weight should be proportionate to height.

The Alaskan Klee Kai should move with the smooth, effortless, agile gait of his Arctic forebears. When in the show ring, they should be gaited on a loose lead at a moderately fast trot, exhibiting good reach in the forequarters and good drive in the hindquarters. When viewed from front to rear while moving at a walk, the Alaskan Klee Kai does not single-track, but as the speed increases, the legs gradually angle inward until the pads are falling on a line directly under the longitudinal center of the body. As the pad marks converge, the forelegs and hind legs are carried straight forward, with neither elbows nor stifles turned in or out. While the dog is gaiting, the topline remains firm and appears level.

Judges must penalize dogs with any one of the following serious faults and withhold championship points from any dog possessing two or more of these faults. Breeders should take as strict or even stricter view of these serious faults in their breeding program.

(A dog with a Disqualification must not be considered for placement in a conformation event, and must be reported to UKC.)

Unilateral or bilateral cryptorchid. Viciousness or extreme shyness. Albinism. Over or undershot bite. Wry mouth. Hanging or drop ears. Tail too short to curl over and touch the back. Absence of distinct mask. Solid coat color (other than white) lacking distinct and contrasting markings. Albinism. 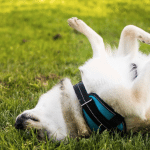 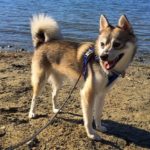